CurvyMama’s Best Pie Dough (or: Why You Should Learn to Love Lard) Let the pig fat rock your world. That’s my most heartfelt advice for pie bakers.

When I waded into the world of piemaking, I did it ever-so-gently, to get over my sheer terror of rolling dough. I tried a half-Crisco, half-butter recipe, since Crisco makes dough easier to handle.

When I stopped hyperventilating and got more comfortable with making dough, I graduated to an all-butter crust. I wanted to get rid of that weird coating Crisco leaves on your tongue, and reap the flavor benefits of butter. The drama of the difference is hard to overstate. Then the pig fat came and rocked my world. When my pie mentor, Kate McDermott, came to teach workshops at my house in 2012, she introduced me to leaf lard, that cherished bit of top-notch fat around a pig’s kidneys. And no pie crust ever tasted or felt as good again.

Now I do want to say that all-butter dough retains a beloved and high-profile place in my heart. It’s my go-to crust when I am baking for Kosher and vegetarian friends. And it’s a great choice when you want a crust that’s a little bit more firm than the butter-lard crust.

But the butter-lard combo is my top choice. The rich flavor of the two fats, and the effect they have on the crust’s texture–the perfect balance of flavorful and flaky–just can’t be beat.

My recipe is adapted only slightly from Kate’s, and is meant to be a tribute to her revolutionary effect on my pie world. Where she uses no sugar, I add a little tinch of sweetness.  Where she uses half butter and half lard, I tilt my proportions a teensy bit toward butter.

Using lard in pastry is nothing new, of course. The good folks over at Everything Pies traced the butter-lard approach back to 1887 in the White House Cookbook (although this version uses baking powder, an ingredient I’ve never found necessary in pie crust). Southern biscuit-makers know the magic of lard.

But somehow it fell out of favor in recent years. When I tell people that I use lard in my pie dough, they often look horrified. Perhaps they’re thinking of the gamey hydrogenated lards that can be found unrefrigerated on grocery shelves.

As maligned as it’s been, though, lard is making a comeback. Kim O’Donnel chronicled her dive into baking with lard in The Washington Post, and Melissa Clark wrote about hers in The New York Times, declaring lard to be “heaven in a pie pan.”

Food & Wine magazine trumpeted the health benefits of lard, noting that it has less saturated fat than butter. And Epicurious praised its lower water content and higher fat content, a perfect formula for pastry.

I’ll just add my small voice to the list: you gotta try a butter-lard pie crust! The kind of lard you need for pie crust is very specific: leaf lard, so named because it spread out in a rough leafy pattern around the pig’s kidneys. Good leaf lard is pure white and creamy, and is devoid of any gamey flavor. It just smells…. rich.

I’m lucky enough to have a local butcher who renders her own leaf lard, and it’s so awesome that just a whiff can get you high. If you don’t live near Wagshal’s in Washington D.C., though, you can mail-order it from respected farms (like Flying Pigs Farm in New York) or find a local butcher who knows what the hell you’re talking about when you ask for leaf lard.

Once you’ve got your leaf lard, you’ll need a good-quality butter that is worthy of partnering with it. I’ve recently come around to using a higher-fat, European-style butter, and I love the results. My current choice is Plugrá, but European-style butters by Kerrygold, Organic Valley, Delitia and others are lovely, too.
Here’s what you do to make the best pie crust you’ve ever tasted:
In a big mixing bowl, combine the flour, sugar and salt. Stir once or twice to combine. Measure out your leaf lard. Cut your butter into pieces about 1/2 inch thick. Add them to the flour mixture, and stir briefly to coat the fats with flour. Using your hands, break up the lard and butter into smaller pieces, taking care not to hold onto any fat pieces for more than a second or two. You don’t want to melt them. Use a quick motion of your thumb against your other four fingers to break up and flatten the fats, coating them with flour as you go.
Stop when the pieces of fat are varying sizes, some as small as peas, and others as big as kidney beans. If you’ve blended the lard into the flour nicely, what began as pure white flour should look a teensy bit more cornmealy now. And there should be chunks of butter visible throughout the mixture, too. … looking for dough to “chunk up”
Now comes the part that drives us bakers–exacting types that we are–nuts. I can’t tell you exactly how much water to add. You have to train yourself to recognize when you’ve added enough. What you need to look for are signs that barely any loose flour is left, and nearly all the dough has chunked up (in my workshops I call this the stage where “everyone in the bowl has a friend”). If you think you’ve reached that stage, you can do a little test: pick up a little handful of dough and give it a gentle squeeze. If it holds together, you’re done adding water. If not, drizzle a little bit more–taking care to be very restrained with the water at this stage–and try again.
Then it’s time to bring the dough together into a ball in the bowl. Cupping your hands together, gather the dough in the center of the bowl, pressing down and together. Here’s the next thing that shocks bakers: knead the dough. What? you might cry, as I did, the first time I heard this instruction. Everyone always warns you not to overwork pie dough! Why are you telling me to knead it?
Here’s why: because it works. We’re not talking about the prolonged kind of kneading you do when you bake bread. We’re talking about a very brief massage, as Kate calls it, just enough to hold the dough hold together and make it smooth and pliable. When I do it, it takes no more than 5 seconds. I’m serious. Four or five pressings or foldings and you’re done.
When you’ve done your quick knead, it’s time to divide the dough. If you’re making a two-crust deep-dish pie, divide it in half. For a two-crust pie in a standard 9-inch pan, divide it in thirds. You’ll have an extra disk of dough left over. Or you could do what I usually do: double the recipe, which will make six disks of dough for three double-crust pies. Make a thick disk from each section of pie dough and wrap it well in plastic wrap. 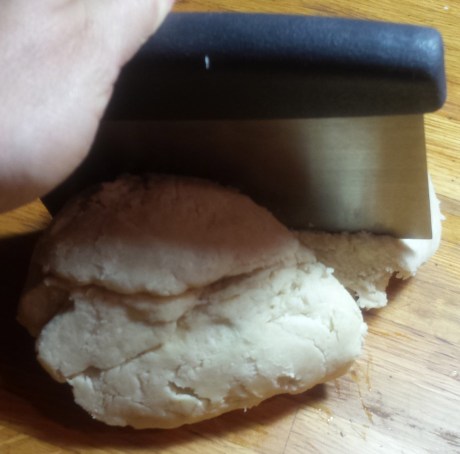