How can I begin to describe what it was like to be surrounded by 800 pies for two days?

Creamy, fruity, and nutty–and I do mean nutty–are a few adjectives that come to mind. But also wonky, fascinating, breathtaking, and hilarious.

All of this and more marked my visit to Orlando last weekend, where I had flown to serve as a judge in the National Pie Championships, organized by the American Pie Council.

Creamy, fruity and nutty describe the pies (and, okay, a lot of the bakers, too, since we’re crazy enough to immerse ourselves in extended conversations about cornstarch, gluten, and offbeat ways to use tiny propane torches). The other descriptors apply to the scene itself, populated by hundreds of hopeful, determined professional or home bakers, and businesslike baking-industry people pitching Karo syrup and bags of cookie crumbs, and briefing us on the bakers’ association lobbying efforts in Congress.

A huge arch of red, white and blue balloons welcomed judges, competitors and presenters to the main hall on Day 1, where all the commercial competitors’ pies (those are the big guys: Kroegers, Bakers Square and the like) were showcased on a massive table. Just outside the main hall doors were tables of merchandise for hardcore pie people. Since I didn’t have to judge until Day 2—the day for pies made by amateurs, and by professional bakers, like pastry chefs—I spent the first day hanging out listening to presentations tailored for the commercial market. They included an analysis of the retail market for pie, a primer on the mechanics of taste, called “Sensory 101,” and a Power Point presentation by the American Bakers Association lobbyist, who urged large-scale bakers to call their legislators about the import quotas and price supports of the U.S. sugar program, and to get ready for GMO labeling.

As riveting as all of this was—and as fun as it was to hang out with my pie sister Kate McDermott, of Art of the Pie—the real rockin’ and rollin’ began on Day 2, when it was judging time. The commercial division had been judged, and awards bestowed, on Day 1. Now it was time for me and dozens of other judges to taste and rate the creations of the professionals and the amateurs.

Our group of five judges was assigned to taste the chocolate pies baked by amateurs, and the cherry pies baked by professionals. Our tables were set with glasses of ice water and little bowls of salted oysters crackers to cleanse our palates between pies.

Like all the other tables, we had an assigned volunteer whose job it was to present us with each pie before it was sliced, so we could judge its overall appearance, and then to cut a slice and show that to us, so we could judge how the pie held together when cut. The five of us then shared that one slice, carefully carving off small pieces that included all elements (crust, filling, toppings). We were to score each pie on nine dimensions, including “pre-slice appearance,” mouth feel, crust, creativity, and aftertaste. The judges at work. A volunteer presents a pie.

We had 22 pies to evaluate this way: 15 amateur chocolate, and seven professional cherry. It was going to be a long morning.

And a long morning it was. We began at about 10 a.m., and didn’t finish until 2:30 pm, with only a short break for a light lunch of vegetables, cheese and crackers. At the table along with me were a retired school board administrator from nearby Celebration, Fla.; a school principal from Tampa, a hospital lab worker from Jackson, Miss.; and a pastry chef from Daytona Beach. Together, we dove into our jobs. Our assigned pie-runner, Nicole, dutifully presented and sliced each pie for us, cleared away round after round of paper plates and plastic forks, and collected our rating sheets.

We tackled the chocolate category first, and found a surprising level of variety: fillings that were dense and those that were light; those that delighted us with special touches (oooh! a hint of Kirsch!) and those that fell far short of delighting us (under-baked pastry, runny fillings, lack of flavor, weird chemical tastes of food coloring). For some pies, our scores landed in a very narrow range of agreement, and on others, we were split by margins of 40 points or more. We were studiously silent as we tasted—talking was strictly forbidden during this time—and we compared reactions after everyone’s score sheets were collected. 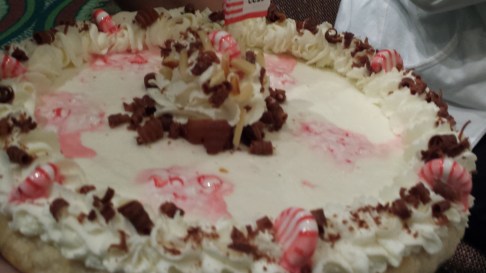 The professional cherry pie category offered fewer chances for winners, since only 1st and 2nd places are awarded to the pros.

The most daring entry, a cherry bacon thyme lattice pie–yes, you read that correctly–got respect for sheer guts, but most of us didn’t think the guts paid off with glory. The bacon was overpowering; we could smell it when the pie was presented to us before slicing. I was charmed by a cherry-coconut entry, with good, tart cherries in the filling and a chewy, slightly crunchy coconut crumble on top, but it didn’t captivate enough of my fellow judges to earn it a ribbon. All in all, we tasted too many bland or underbaked crusts, too many fillings that used weakly flavored cherries. And I was disappointed to see a fake lattice top in the pro category (come on, you guys, weave the lattice strips for real!).

At the awards reception that evening, we stood around munching potato chips while we were serenaded by a singer with a unique job description: He spent hours improvising songs about pie on the spot (hilarious! and very challenging!). I think it’s safe to say that was an experience I’ll never have anywhere else.

When it came time to hand out awards, the blue-ribbon-winning pie in the amateur-chocolate category turned out to be a charming “Scandinavian chocolate,” a dense whipped-ganache filling, topped with lingonberry preserves. Second place went to “Bananutella,” which hid thick slices of banana in its crust, piled with a creamy chocolate filling, layer of darker ganache, hazelnuts and whipped cream. In third place was “Tuxedo Junction” pie, boasting two distinct layers of filling: a white, cream-cheesy one, and a dark brown chocolate one. A slice of Scandinavian… … and a slice of Bananutella. When the professional awards were announced, 2nd place in the cherry category went to a pie with a fluffy cream-cheesy layer topped with cherry filling. I was gratified to see the blue ribbon go to “Ain’t No Pits In This Cherry Pie,” a very-very nice classic cherry pie with a deeply browned and buttery crust and a crumb topping. None of the top pies in the two categories I judged won “Best in Show” awards, which come with $5,000 prizes. In the professional division, that honor went to Evette Rahman, the owner of Sister Honey’s Bakery in Orlando, for her peanut butter silk pie. She picked up four other ribbons that night, too. Patricia Lapiezo of La Mesa, Calif., took Best in Show—and six other ribbons—in the amateur division for her “Chocolate Buzz” pie.

And what happened to the hundreds of pies that were part of the National Pie Championships, you might wonder? Some of them were sold by the slice that evening to raise money for charity. Some was given to event volunteers, and to the staff at the hotel where the contests were held.  Some unavoidably, were thrown away, since it’s impossible to fly home with dozens of half-eaten pies. The rest were collected by their bakers, who hauled them away in wheeled carts or stacked cartons, and packed them into cars for the long drive home.

And that marked the beginning of the new cycle: thinking about what to bake for next year’s competition.