It started last Christmas, with the realization that I couldn’t make it through winter without peppermint bark.

Mmmm-hmmm. Yeah, that stuff. You know what I mean. So I thought I’d try to make my own version–a CurvyMama version–which would, of course, have to be in pie form.

I played around with various kinds of creamy or moussey fillings, and this is is what I came up with. One layer of white chocolate peppermint mousse, and one layer of bittersweet chocolate mousse, topped with fluffs of sweetened whipped cream and crushed peppermints. (You’ve got to use the red-and-white kind. It’s an endearing dash of color. How can you not do that?)

In the spirit of full disclosure, I will say that this pie isn’t the, um, the quickest pie to make. That’s because you have to make enough custard base for the whole pie, but then divide it into two sections so you can flavor one with peppermint and white chocolate, and the other one with bittersweet chocolate. The bottom layer has to chill in the pie for a while before you can finish and add the top layer. See?

But the result is so delicious and captivating that it’s worth it! Just look at the photos! (I’m sorry that the whipped cream was a little slouchy, and the peppermints had oozed color a teensy bit, when these photos were taken. I had a horde of hungry officemates breathing down my neck to get done with the damn photo shoot already and give us our slices! These people are journalists, and if you think they’re pushy when they’re chasing stories, you should see them when they’re waiting in line for free pie.)

So here’s what you do. Roll out and blind-bake a single pie crust. (Here’s CurvyMama’s dough recipe.) Set it out to cool.

Now you’ll make the custard base for the mousse. In a saucepan, heat 1 1/4 cups of the cream, just til it gives off steam (don’t let it simmer!).

Whisk together the egg yolks, sugar and salt in a medium bowl. When the cream’s hot, drizzle it into the egg mixture, whisking constantly. Pour it back into the saucepan and cook over low to moderate heat, whisking constantly, until it’s thickened. Pour the custard through a sieve placed over a bowl. Divide the custard evenly into two bowls. Add peppermint extract to one, and the vanilla paste or extract to the other. Whisk the peppermint-flavored custard into the melted white chocolate. Let it cool until it’s no longer warm when you touch your fingertip to its surface.

Whip 1 3/4 cups of the cream until it just forms stiff peaks (don’t overwhip). Divide it in half. Put half in the refrigerator; we’ll come back to it in a little while. Of the half you still have in front of you, whisk about one-quarter into the white chocolate-peppermint mousse. Carefully fold in the rest until combined. (You haven’t touched the whipped cream that you stashed in the fridge, right? Good.) Spoon the white chocolate-peppermint mousse into the pie shell. Refrigerate. Now you’ll use the same method to finish the chocolate mousse. Melt the bittersweet chocolate. Whisk into it the custard base flavored with vanilla. Let that cool until its surface is no longer warm to the touch.

By the time the white chocolate-peppermint mouse layer has set sufficiently in the refrigerator, your chocolate custard base should be ready to finish. (If it’s not, give it more time.) When the chocolate base is no longer warm, get that remaining whipped cream out of the fridge (See?? We didn’t forget it!) and do the same as we did with the white chocolate portion: whisk in one-quarter of it, then fold in the rest. 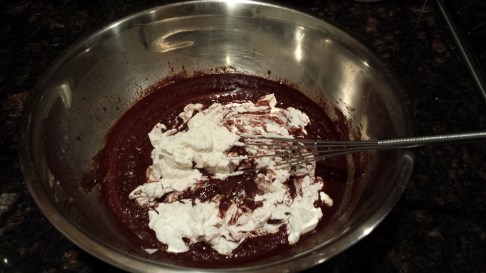 Whisking in some of the cream… 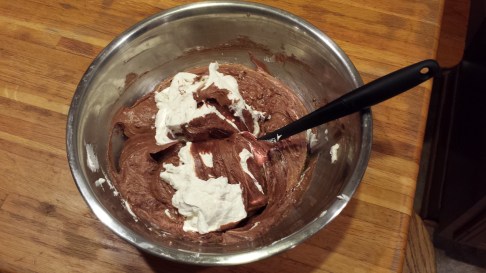 … and folding in the rest. Put 6 to 8 peppermints into a Ziploc bag. Using a hammer, pound them lightly until they shatter into small bits. Try not to hit them so hard they dissolve into powder. You want some of those cute red stripes to be visible on the pieces.

Shortly before serving, take the remaining 1 cup of heavy cream, combine it with the confectioner’s sugar, and whip until it forms soft peaks. Transfer to a pastry bag. Pipe nice big fluffs of sweetened whipped cream around the edge of the pie. Sprinkle with crushed peppermints.